Free
Please be aware the Linux versions of our plug-ins are still considered beta. While the plug-ins are stable, we are not able to provide the same level of support for these products as we do for the macOS and Windows versions. Support is provided via the Linux and u-he communities on our forum.

Zebralette is our version of a Trojan horse. A free synthesizer and an introduction to Zebra2’s fantastic oscillators. Perhaps it will persuade you to try Zebra2 and upgrade. If one oscillator is this powerful, imagine what you can achieve with four… and all the other great features available in Zebra2.

Zebralette is included with the Zebra2 download and is installed at the same time.

Viktor (The Unshushable Coktor) puts Zebralette through its paces with a track well-suited for a 1980s action movie. 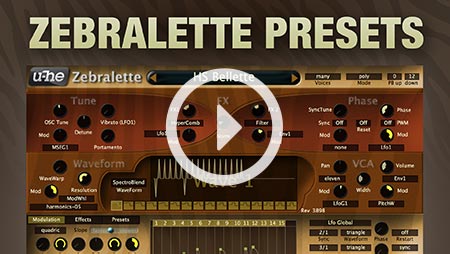 A walkthrough of a variety of Zebralette’s factory presets

Zebralette is an introduction to Zebra2’s powerful oscillators. Zebra2 can seem overwhelming at first glance, so we stripped it down to a single oscillator plus a few other features and created Zebralette, the little Zebra. Once you master Zebralette you can move up to Zebra2 with confidence. And your presets can come with you, as Zebralette presets can be opened in Zebra2.

But more than a teaching tool, Zebralette is an incredible sounding synth in its own right. Surrounding Zebra’s spectral oscillator with a few core modulation options and effects make Zebralette highly capable. With unsion options (think supersaw, but Zebralette is not limited to saw waves, so we refer to it as superwave), 16 voice polyphony and two different envelopes, you have everything needed to create some marvellously complex sounds.

One oscillator may not seem like enough for a synthesizer, but Zebra2 oscillators are rather powerful and clever.

It resembles many other oscillators you may have used. You can choose a waveset from the included library, or use the waveform editor to draw your own shapes. Here is where things start to get interesting: The Waveform Editor manages up to 16 different waves and lets you rearrange, duplicate and morph between individual waves. Use one of modulation sources and the WaveWarp control to scan through the 16 waves and create unusual, dynamic sounds.

There are four drawing modes: GeoMorph, SpectroMorph, GeoBlend, SpectroBlend, each offering a different approach to creating and manipulating waveforms.

Using the two Geo modes you draw the waveform shape using up to 32 points, while the Spectro modes let you create the harmonic spectrum over 128 columns. When using WaveWarp to scan through the waveset, Morph alters the waveform, whereas Blend blends (crossfades) between adjacent waves.


To add further complexity, use one of the 24 Spectral Effects to warp, mangle or add subtle harmonics to your sound. Read the user guide for the full list and descriptions.

You can do quite a lot with just one oscillator.

“…simple doesn’t mean boring. This is the caviar of simple.”

This product is a free download and does not require a serial number to unlock it.

* About Linux: Please be aware the Linux versions of our plug-ins are still considered beta. While the plug-ins are stable, we are not able to provide the same level of support for these products as we do for the macOS and Windows versions. Support is provided via the Linux and u-he communities on our forum

Zebralette is not a standalone product, it requires host software. Zebralette is compatible with nearly all DAWs.

Try the latest builds of Zebralette, which include improvements and bug fixes. Note: these are stable, but still beta versions.

Older Zebralette installers are in our release archive (for legacy systems).